Just one week after our integration. 7/2/14 the same day we visited Hogares Liz y vida. In fact around an hour after I got home  I received a barely intelligible call from Soraya. There was lots of background noise and she was excited. She repeated the message 2 or 3 times before changing to tomorrow we are going to sign the adoption papers! She said she would pick Diego and I  up at 8:15 am the following day.  She also said many other things that I did not understand. I was just so happy I did not care about anything else.

I was unable to get Crystal on the phone to give her the news until hours later she was out running errands.

The next morning I was up and showered before Diego was aware of the new day. He had eggs, banana  He would not eat. I made him sit at the table but I don't think he ate more than 3 bites. The drive to the center of town was long but I have done it several times before. On the way we stopped on the side of the highway for a bit to pick up Lucy our Lawyer. Traffic was the normal horrific mess but we were good on time so we stopped so that Lucy could do a  quick errand. We parked 3 or 4 blocks from the courthouse and walked past the gold museum by about a block to get to the court house. We went up in a stinky elevator to an odd little hallway. One end was the elevator the other was a service window the gray was kind depressing. Is gray paint cheaper? On the walls were some clip boards with notices of judgments and such. At the service window Lucy asked for the Judge. In short order the judge came out and beckoned us through the service door then into her office. It is very odd for a judge to meet with the adopters or adoptees. We were so blessed to have the paperwork move so quickly and also to be able to say thank you in person for that great blessing. The judge enjoyed talking to Diego and giving him little toys (including Colombian stacking dolls and Plush Flowers) to play with. She was very sweet. Somehow Diego found a rag and began to very carefully clean the book shelf behind the judge's desk. He did a great job! Soraya used my camera to snap pics of most of the fun in the judge's office. Then Soraya snapped a photo of  Diego the judge and I. Next was the big thing. One quick signature and it was done. We celebrated and I thanked everyone as many time as I could. They also thanked me for adopting Diego and expressed gratitude for having the opportunity  to assist in the adoption! What a great day. 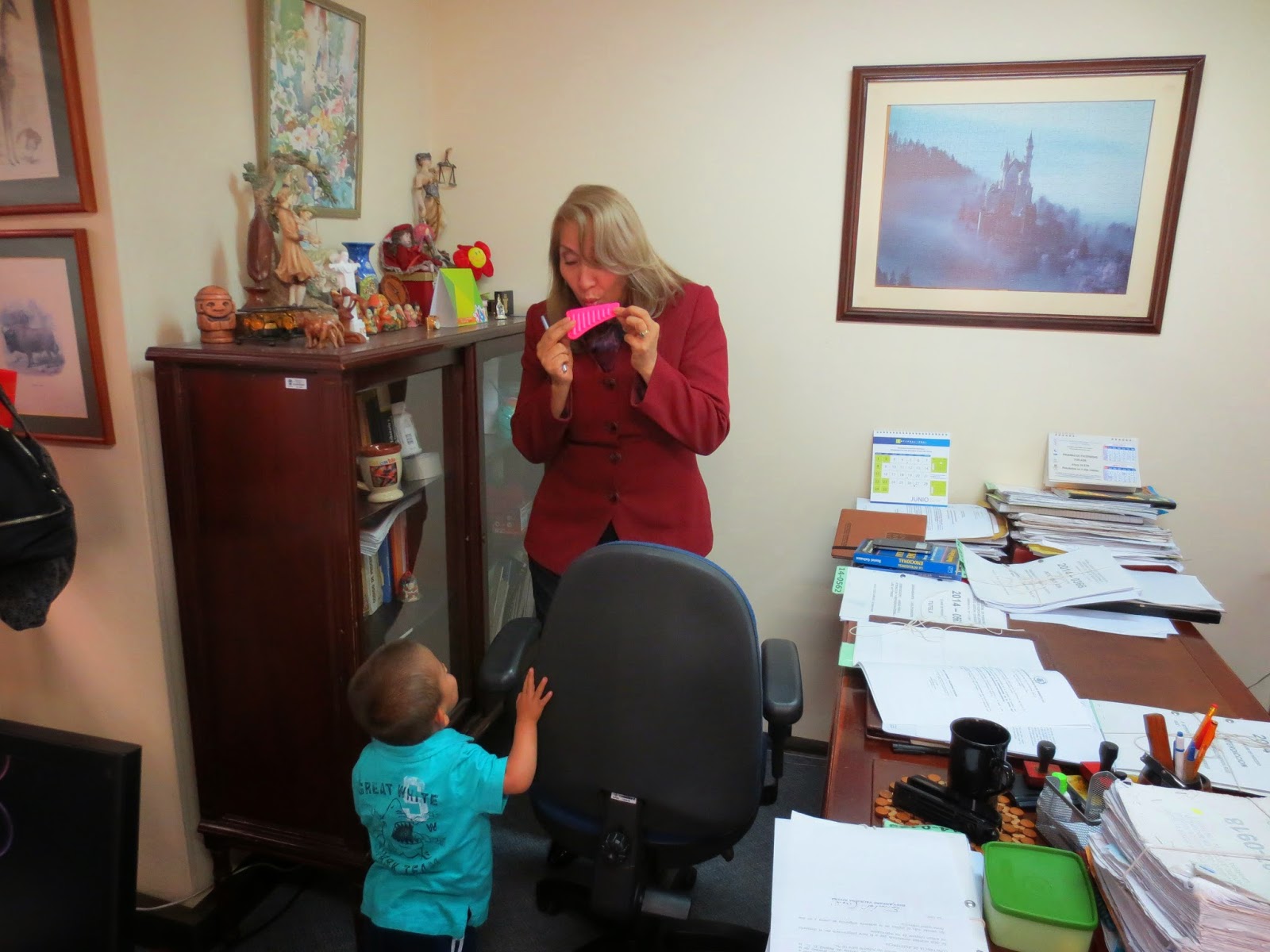 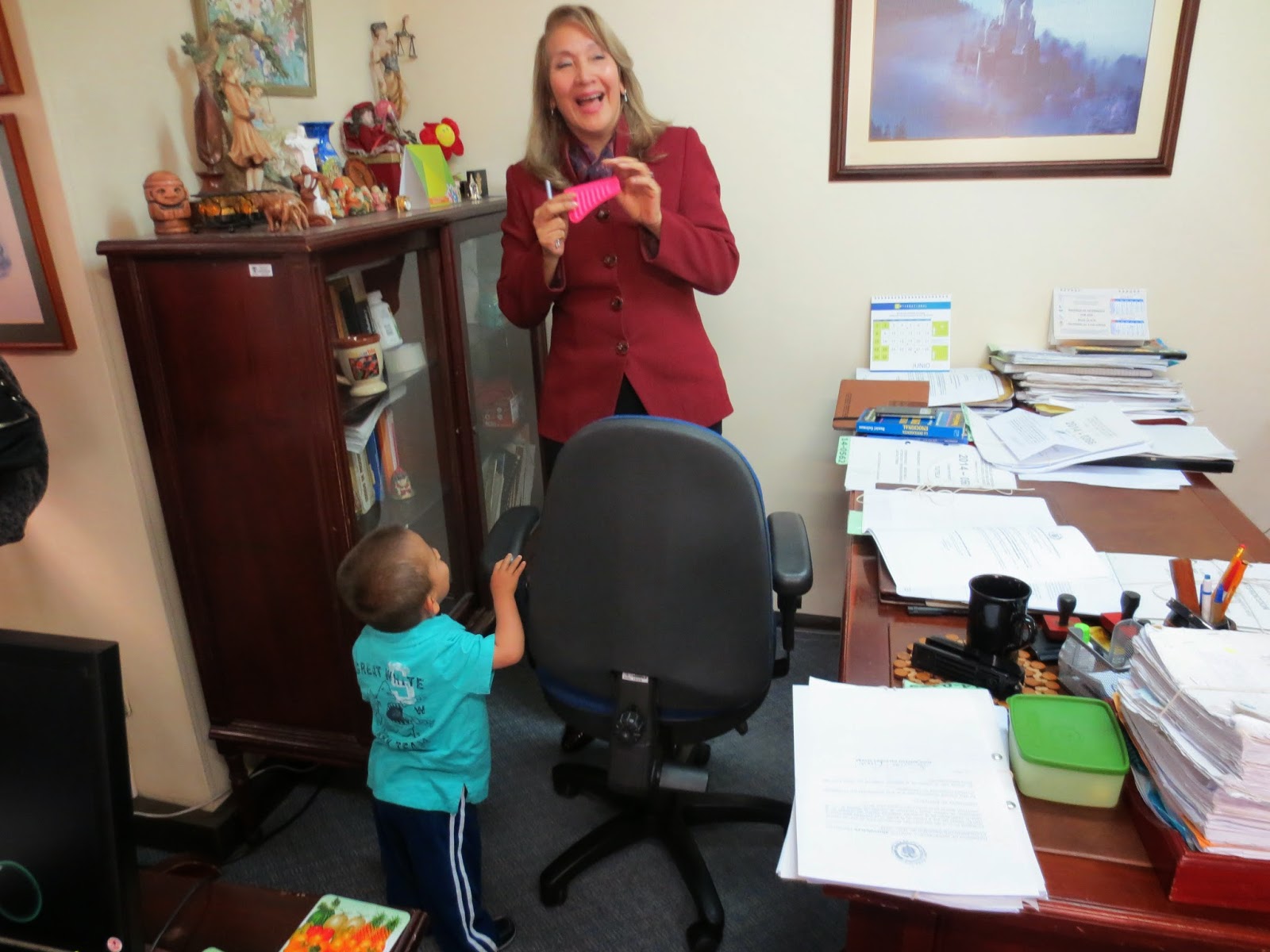 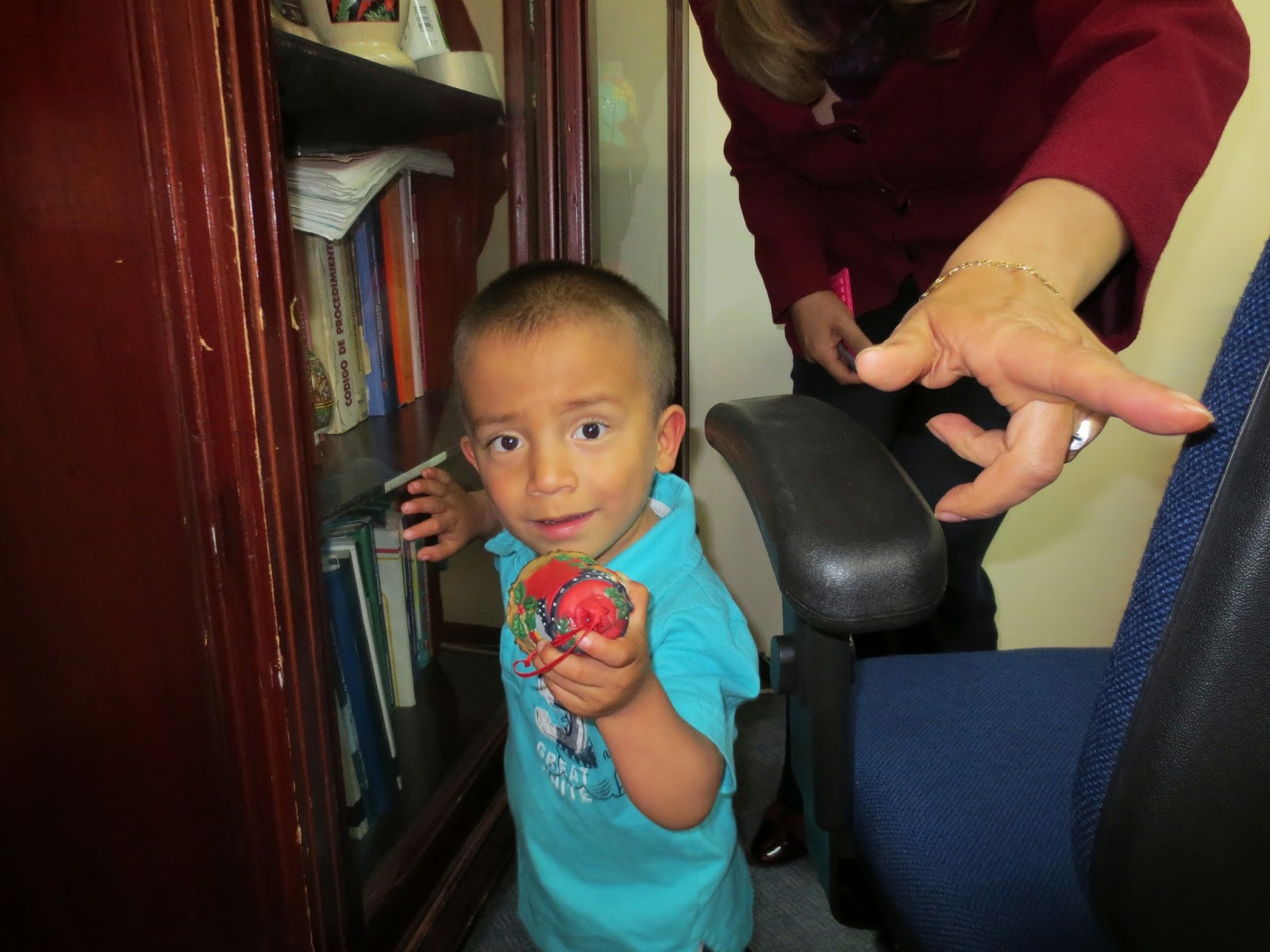 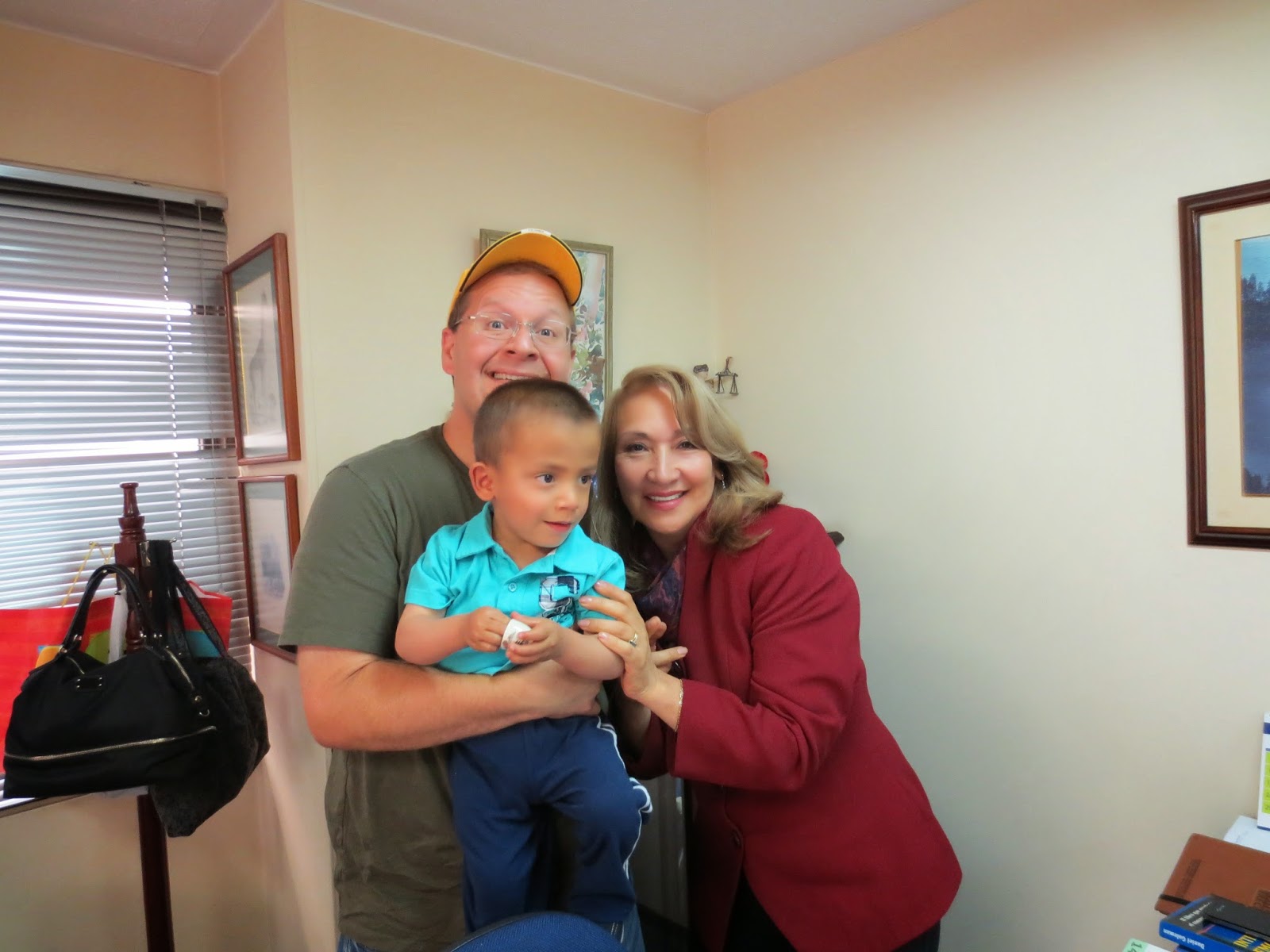 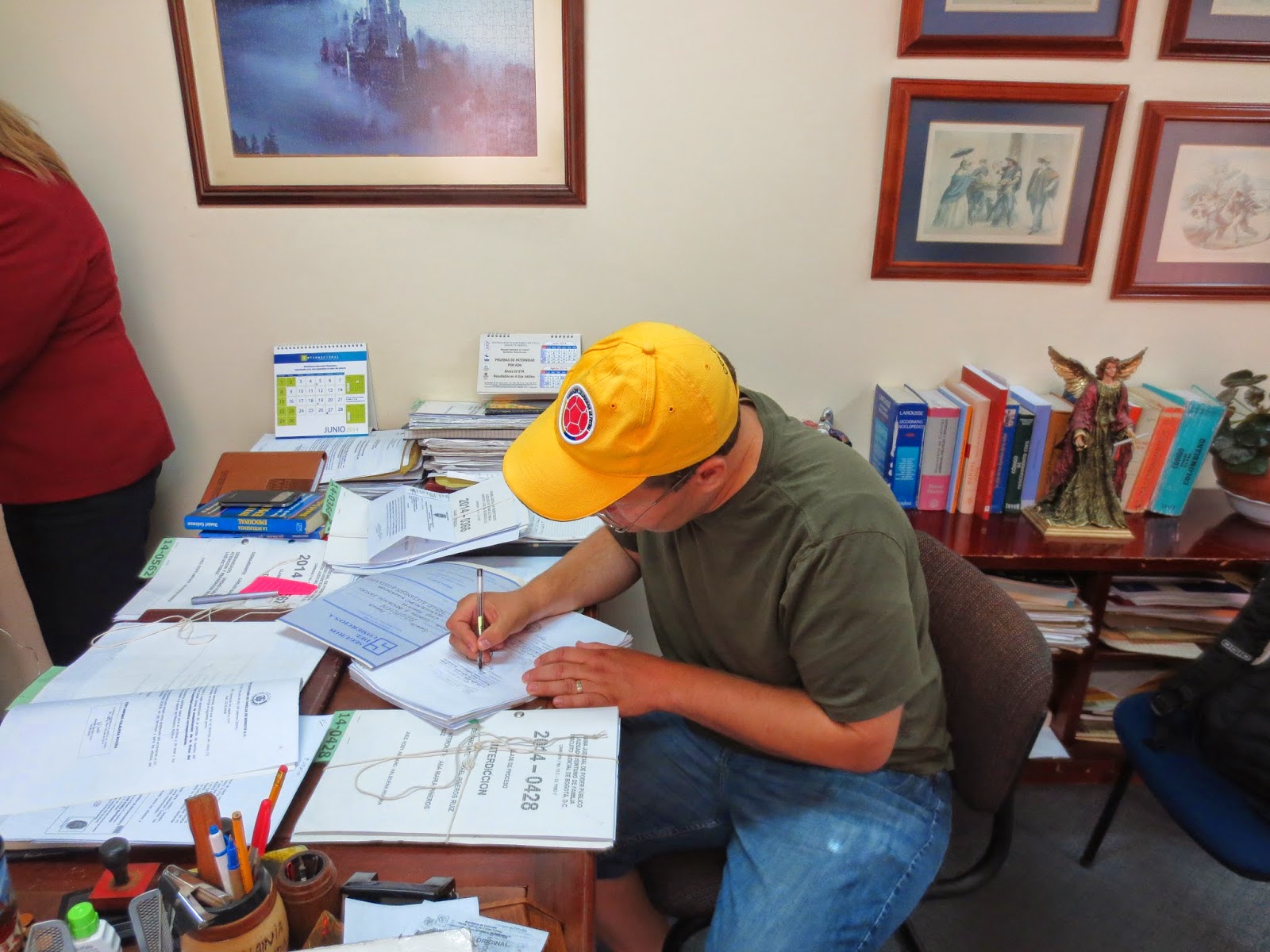 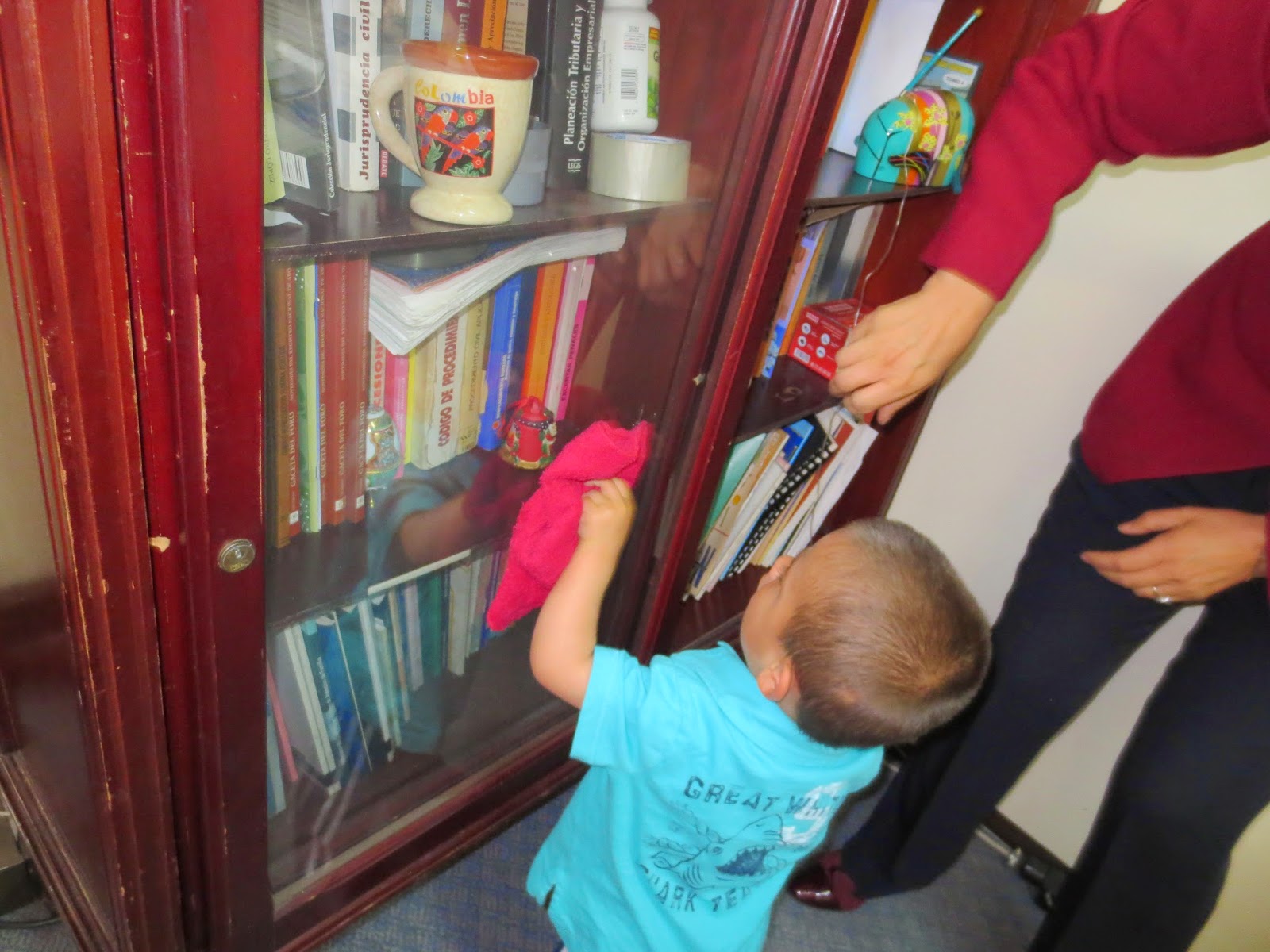 and Arequipa on toast for breakfast.