Posted by Yanceyfam at 12:48 PM No comments:

I can't believe it, Addy turned 6 yesterday. It is so hard to believe that she is already 6 and so grown up. I am so grateful to have her in our family. Addy came in to wake me up, she told me she felt a little different now that she was 6. We had a fun day full of celebration. Addy had fun going to school and being sung to by her friends. Addy begged to go to the Mayan for her special day. Ben came home early from work so that we could go on our adventure. We got to the restaurant and went to the doors only to find them locked, aarrgghh!! it was closed. Addy was very upset, she started to cry. We quickly formed plan B and headed to the mall to find some form of entertainment until The Mayan opened at 4 pm. We hit the food court and the kids had pretzels for lunch to hold them over. We let the girls ride on the carousel which they loved. We spent some time at the little dinosaur playland in the mall. The girls loved it and ran the whole time we were there. Finally, it was time to make our way back to the car. After one more ride on the carousel, we left the mall. We drove around for a while until it was close to opening time. We waited outside the restaurant letting the girls climb on the giant stone snakes. Finally, the doors opened. We were the second group in. Can you believe they wouldn't give us good seats, we complained and asked to be moved and were told we would have to go back to the lobby and talk to the manager. What a bunch of jerks! After a mediocre dinner and two diving shows, our Mayan adventure was complete. I am glad that Addy thoroughly enjoyed herself, because I have a few choice words for the people at the Mayan. Anyway, it was now home for presents and cake. Addy got a new scooter, she has been trying to ride my huge, ancient scooter and it's a little too big for her. She also got new clothes for her Fancy Nancy doll and some coloring supplies. She was thrilled with all of her presents. After some scooter time we had cupcakes. Addy made my life easier by requesting a flower cake which is just a bunch of cupcakes arranged in the shape of a flower with a fruit roll-up for a stem. This is one of the easiest birthday cakes to make. After a long day of fun, the kids had a bath and then to bed. What a fun day, I am glad that birthdays only come once a year though.
Posted by Yanceyfam at 10:26 AM 1 comment: 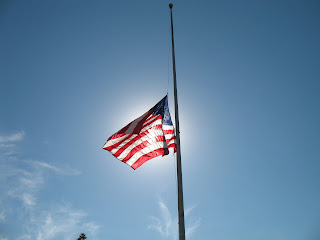 I'm sure you have seen the news and heard that Micheal Alleman a soldier from American Fork was killed in Iraq Monday morning. If you watched KSL news last night you saw his awesome wife Amy tell of her brave husband. Micheal's parents live in my ward and I have known them for a long time. I never had the chance to meet Michael, but I am friends with his wife Amy. Amy is such a strong, wonderful woman. Knowing Amy, I know what kind of a person her husband was. He loved his family and his country very much. I cried when I heard about Micheal's death. Kai, Amy and Micheal's 6 year old is in Addy's kindergarten class. I told Addy that Kai's daddy had died, she teared up and said "Kai must be so sad." That night in our family prayer the first thing Addy said was please bless the Alleman family and Kai. More tears. I am so glad to have such a sweet caring child. Yesterday morning I met 2o+ youth and parents at 6:00 a.m to put flags around the ward and in front of the Alleman's home. Again, more tears. These youth and parents were so happy to spend a few minutes to try and honor such a great man. One of my young women told me that she had such a good feeling all day. Later in the day I went to visit Amy. She told me about Micheal's death and what a hero he is. She is also a hero for standing so brave and so accepting of her trials. We talked about the peace the gospel brings and the comfort she is receiving at this time. I don't think I will ever look at the American flag the same way. I am truly grateful for Micheal's sacrifice for his country. He died a true hero. Thank you Micheal. To all of the Alleman's Thank you for your sacrifice, we love you very much and will continue to keep you in our prayers.
Posted by Yanceyfam at 8:47 AM 2 comments: